‘Misery, wretchedness, ennui and the devil — I’ve got to spend another evening in Albany. Of all the miserable, wretched, second-class, one-horse towns, this is the most miserable.’ - H.H. Richardson
I've been struggling with Albany for years.  Just as I started to think I was being a snob for thinking Albany was a depressing, desolate place I found out that quite historically I wasn't alone.  The concrete architecture, the crime, the lack of parking around the only "nice" street... man, it's a tough place to love.  Have you ever read the Lonely Planet entry on Albany?  Do it.

So far after being back in the area for 7 months or so, I think I've found my peace.  I think I'm doing alright  mostly because I don't actually live in Albany, but a nice rural town outside of Troy.  I like Troy, it's much cozier and walker-friendly than Albany.  It also has my new favorite hang-out, Footsy Magoos.

Anyway, this past Saturday a visiting friend and I spent the entire day walking around Albany.  I've never done that before.  Surprisingly it was a good time.  We went to the New York State Museum and strolled around Lark Street, and then lounged in front of the Capitol.  Just as I was coming around to maybe feeling something positive toward the city, I went into the museum gift shop.

And this is what I found: This is a postcard of the Legislative Building.  My first thought was, "Wow, what an ugly building to put on a postcard."  And then I looked closer. 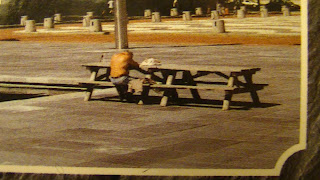 Yes, that's a homeless man with his shirt off.
My friend and I had found this postcard a couple of years ago, but since then we haven't been able to find it.  Naively, I thought that perhaps they had discontinued the postcard since there was a shirtless homeless man on it.  "Yay, Albany!" I thought, for paying attention.  Of course on this most recent trip to the museum I had dreamed I would find a miscellaneous copy lying around, but I knew I shouldn't get my hopes up.  But, man, was my day MADE.  They had a whole new supply of Legislative-Building-Homeless-Man-Postcards!  I was excited to show my friend, but at the same time I was embarrassed and disappointed in the city I'm trying so hard not to hate.  How could the photographer not notice?  Was he in THAT much of a rush?  How did the printers and the proofers not notice?!  Okay, so I'm not "embarrassed" as much as I am baffled.  And deeply, deeply amused.

I bought three copies and asked the cashiers if they knew why I was buying so many of the same postcard.  I don't think I've ever seen a happier pair of disgruntled museum gift shop employees.  Now I'm sure that via word of mouth those homeless man postcards are going to fly off that flimsy wire shelf.  Almost as quickly as the Eliot Spitzer ones did.

My amusement rose substantially when I walked on Hamilton St and saw this poster: 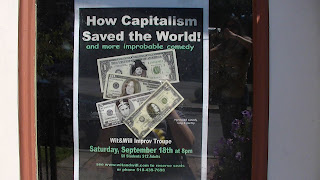 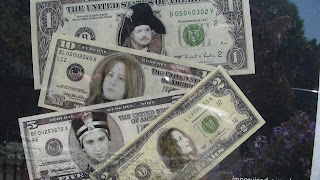 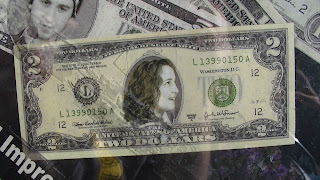 I guess I should be grateful to live near a place where they allow my face to be printed on paper and posted on a city street in advertisement for real, live, professional entertainment.  I'm on the $2 bill!!! A perfect choice.  Thanks, Laura!

Keep your eyes glued for my next post...my tattoo tale!
Posted by Zeld at 9:09 PM