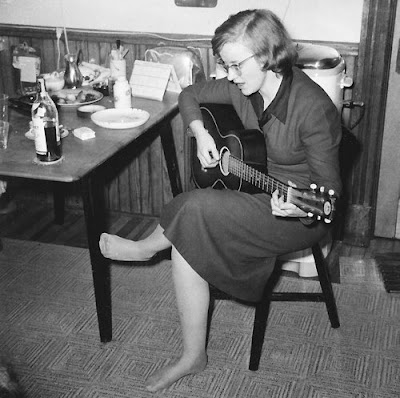 Late last Friday night I found myself alone and contemplative with a couple glasses of wine in my belly. When I get this way, it feels like I'm going to explode with words and ideas and affection, so I attempt to record all of my thoughts no matter how random or half-baked or trivial. Fortunately and unfortunately, I very rarely take any kind of concrete action during this state. However, last Friday I did act. And I lucked out. Or did something inside my rib cage know this was going to happen?

Last Friday night I emailed the brother of Connie Converse. Verbose and full of admiration, I explained to him that I would like to make a documentary about her life and music. He responded in less than 24 hours with a blessing and enthusiastic offers of help. So here I go. Now I must complete this project, whether I have the skill or not. Maybe I'll develop the skill along the way. This past week something has clicked. I will go to film school. I already have an appointment with a program coordinator. I will make this documentary. Maybe I will make other things along the way, too. This path just makes sense.
But this isn't just a story of my own self-discovery. I want the average American to know Connie Converse. (Well, maybe not the average American. I'll settle for the ones who actually go see documentaries.) Lately Connie's music has been striking a deep chord with me and I've been scouring the internet for more and more information. I found out about her from Patell and Waterman's History of New York blog. Her story is of interest for so many reasons. Connie - born as "Elizabeth" - Converse was a bright kid, valedictorian of her high school, received a full ride to Holyoke College. After receiving many academic awards in the first two years of college, she decided to drop out and head to New York to pursue music much to the dismay of her very religious upbringing. Connie found herself in Pete Seeger's circle and even appeared on television with Walter Kronkite. However, these were the only small "breaks" she received. She never met anyone, either agent or other, who had the power to push her songs to the front of public consciousness. One wonders how successful and popular she would have been if she lived in this age of self-production and internet publicity...
Frustrated with New York and her lack of commercial success, Connie moved to Michigan where her brother Phil and his wife lived. Phil is still a professor at the University of Michigan, and I found him through the school's website. She worked for a journal run by the University for a time, and only played her music at parties. She had stopped writing new music. In the mid 1970s Connie wrote letters to her friends and family, claiming that she needed to restart her life someplace new. There is speculation that the prospect of major surgery along with a general disappointment led her to pack up her Volkswagen beetle and drive off, never to be seen or heard from again.
Her solemn yet witty personality comes through in her songs, and I recommend anyone interested to get the fairly recent release of some of her material on an album called "How Sad, How Lovely." I don't want to give away everything about her in this first post, so check her out...if only to hear her rhyme "squirrel thing" with "quarreling."
I'll try to keep you all updated on my very daunting excursion in the world of research and documentary film making.
Adios!
Posted by Zeld at 10:24 PM

Your next project, track down Florrie Fisher